The end of the 19th century in late colonial India is marked by a revival of textile industry and carpet weaving. Interestingly enough, many products of this re-emerging economy, quality rugs in intricate designs, came from Indian prison factories.

The so-called Jeeli or jail carpets was not a new idea; earlier, in the 16th century, Mughal Emperor Akbar is said to have brought skilled weavers from Persia to teach the art to inmates in Mughal jails across India.

The idea appealed later to British authorities who decided to continue the Mughal tradition in the 19th and 20th centuries.

Apart from the obvious economic reasons, weaving was viewed as part of prisoners’ ‘reform’ therapy.

It is however the humble cotton yarn dhurries that have of late become most coveted home décor floor coverings and a popular choice of many designers in the west.

This rug will suit modern and ultra-modern home decor

We provide flexible financing on selected products. Please contact us for details as some restrictions may apply. 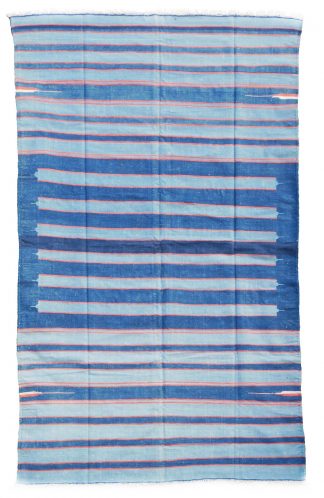